Home/News/Transforming an Old Monarch
Previous Next

I am an old Monarch.

No, I’m not the Queen of England. I’m a butterfly currently hanging out in a beautiful garden in the Pacific Northwest. I’ve been fluttering around here for a couple of weeks and have seen a lot of things come and go—blossoms, people, and insects. On an ordinary day, I simply fly around flapping my brightly colored wings, performing aerial acrobatics, and tasting delicious spring nectar. Today was different. I experienced what it means not just to be “old,” but to be an Elder.

While hovering over a patch of milkweed, I spotted a plump green and black striped caterpillar showing signs of significant distress. This little guy was pacing on all 16 feet and seemed quite anxious. Although I seldom interact with the younger generations, I wondered if I could help. 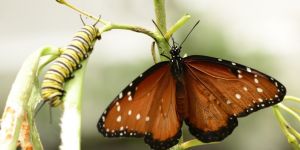 “You OK?” I asked with a little more vigor.
No answer.

“Hey, Dude!” I thought I’d try a more contemporary greeting. “Whassup?”
The fretful caterpillar stopped shuffling, hesitantly looked up at me and answered, “Not sure.”

I stopped flapping and got closer to hear his gloomy discourse.

“I’ve been having such a great time here among the luscious leaves,” the caterpillar moaned. “But I’ve been instructed to shed my current reality, spin a protective environment and shelter in place. It sounds dreadful, and I don’t want to do it.”

“Ahhh. You need to cocoon.” I replied, trying to muster up an air of wisdom. “We’ve all had to do that.”

I took a deep breath, folded up my wings, and began sharing my journey, hoping it would encourage and even instruct him.

“All Monarchs go through this experience,” I began. “We start as a little egg, eventually become a caterpillar like you–enjoying life and leaf. Then we have to halt. Stop. Cease. Come to a standstill. Cocoon. It’s nature’s way.”

“Not fair.” He protested. “I don’t want to be a Monarch. I want to be a human, you know, like the ones walking through the garden. They have it so good.”

“Oh, young one. You should have been here in the spring of 2020. Even humans had to cocoon. See, there was a horrible virus sweeping the world, and many humans had to shelter in place to save their species. Cocooning didn’t come naturally to them as it does to us. Young and old alike had to build and stay in protective environments to save each other. Some got restless and tried breaking free too early, and they just about ruined the whole order of creation.”

“What happened? There certainly are lots of human beings living on our planet.” I finally had the little guy’s attention.

“Humans learned the value of cocooning. They learned they had to retreat. Be still. Transform. Accept a new normal.”

“So, you’re saying there is a purpose to my giving up this luscious life and hanging upside down for a while? I still think it sounds dreadful.” He continued to lament.

“Take a look at me,” I reluctantly implored. “Without the cocoon, I would not have become a Monarch Butterfly! Without the darkness of nature’s sheath, I would never have transformed into what I was created for!”

Slowly a look of understanding crossed the little caterpillar’s countenance as he grasped the wisdom of the ages. He would find the purpose of his life through contemplation, renewal, and re-birth. He would emerge from the cocoon, a new creature. 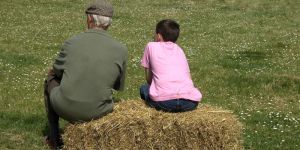 As I took flight to continue my journey, I looked below and saw a hopeful caterpillar clinging to a nearby branch and beginning to spin. I knew he would be alright. So would the future of butterflies.

In connecting with the next generation, I also experienced transformation. I became an Elder, not just an “old” Monarch.