Home/News/Second Half Marriage: Grace, Grit and Giggles
Previous Next

For a sizzling second half marriage, you need…  Grace, Grit and Giggles

Every year when we go out for dinner to celebrate our wedding anniversary, my husband asks our server the same question, “Do you know what happened on June 17, 1972?” Then 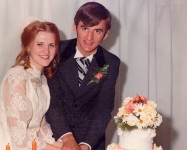 with a wink and a smile, he quickly adds, “Besides our wedding, of course.” If the waiter is under the age of 30, the response is usually a disinterested, blank stare, followed by a shrug. Ask Boomers that question—they’ll lean back, and with closed eyes, rack their brains to recall what significant event may have made history that night.

I have listened to Richard repeat this line of questioning for 40+ anniversaries. I brace myself for it, and can’t help but laugh out loud when he has to supply the answer to this seldom pursued trivia. We had nothing to do with the Watergate break-in, but our wedding night is unintentionally tied to the event.

Our country has been through a lot since the political escapades of the 70’s; so have we. When we celebrate our wedding anniversary, Richard and I review the challenges and the blessings of the year. We also consider what can assure our marriage will survive, thrive, and sizzle—for a long time. I think there are at least three things that contribute to marital success: Grace, Grit and Giggles. 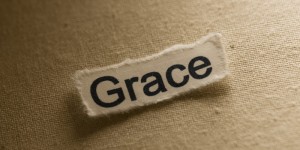 Ed and Elisa were both widowed several years before they met. Now in their 70’s, they have been married for just over a decade. Daily they dispense grace into their relationship by encouraging each other to talk about their first spouse without feeling compared or inferior. “We’ve cried over each other’s losses,” they told me. “We understand each other’s pain.” For them, grace means allowing each other to honor their first marriages and families while at the same time celebrating a new life together. “We know God is not done with us, and He has given us to each other to serve him in new ways.” Without grace, they would become judgmental and resentful—limiting their happiness and suffocating their joy.

Christians typically define grace as God’s favor toward despicable us. We don’t deserve it, but we gratefully receive His lavish love and pardon. In marriage, grace means giving space, cutting some slack, allowing the other person to grow, and dispensing unlimited portions of forgiveness. Grace gives the other person a chance.

Without grace, marriage in the second half of life can become rigid, unyielding, frightfully cold, and stifling.

Next week: We’ll consider GRIT as an essential component for successful second-half marriages.