Sam the Olympic Eagle and You

Home/News, Re-Ignite Your Life, Third Calling/Sam the Olympic Eagle and You
Previous Next

Sam the Olympic Eagle and You

On July 23rd, the world will finally get to watch its best athletes compete in the Summer Olympics in Tokyo. After a one-year delay due to COVID 19, stadiums, tracks, gymnasiums, and pools will host over 11,000 athletes and almost no fans. Sadly, pandemic protocol means the rivalry and revelry will be watched virtually, not in person. It isn’t the first time the Olympic games have made adjustments—and, as always, history has its lessons.

Take, for instance, the 1984 Olympics held in Los Angeles, California. Where else would you expect grandiose and ambitious pageantry? Home of Disneyland and Hollywood, Los Angeles fancied putting on a magnificent show. America was anxious to celebrate its distinctive way of life, so game organizers, celebrities, and politicians eagerly participated in fashioning the event. Appropriately, the bald eagle, a symbol of American freedom, was designated as the mascot. He was named Sam the Olympic Eagle and was cute, fluffy, gregarious, and appropriately dressed in red, white, and blue.

It’s not surprising someone proposed a real bald eagle should open the games by soaring over the LA Coliseum to a rousing performance of The Star-Spangled Banner. The grand bird would then land on a perch right beside the American flag! At the 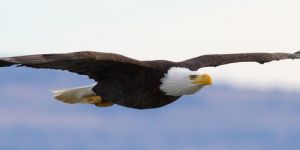 time, bald eagles were on the endangered species list, so the U.S. Fish and Wildlife Service provided just one candidate for the job. It was Bomber, a 22-year-old, 12-pound bald eagle who had spent the majority of his adult life in captivity. He was flown from a wildlife research center in Maryland to a large two-bedroom birdhouse in Los Angeles and immediately went into training for the big event.

After completing a small number of nearly successful flights, Bomber was deemed ready for dress rehearsal. Sadly, the grand bird lapsed into convulsions, collapsed, and died. In an interview with Time magazine, Bomber’s trainer stated,

The eagle had been fat and coddled for years and when finally called upon to behave like an eagle, he failed.