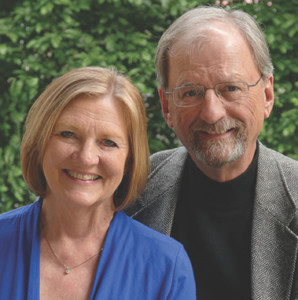 We are leading edge Boomers. We love rock and roll, our grandchildren, travel, and our iPads and Kindles! We desire to make the most of the bonus years God is giving us, utilizing our life experiences, values, passions, and priorities. God wants us all to live lives that impact our world for Him.

We have spent 40+ years in ministry, in the pastorate, as consultants, writers and speakers. We believe  Boomers can make a great and significant impact in the world, and we are focusing our research and energy to encourage and guide our peers through the Re-Ignite experience.

It’s an exciting journey. We know. We are on it!

Richard L. Bergstrom, D.Min. is President of ChurchHealth, a non-profit, faith-based organization dedicated to personal renewal, church revitalization, and community transformation. He served for ten years as the Executive Pastor and 2nd Half Ministries at Northshore Community Church in Kirkland, Washington. Richard has a B.A. degree in Psychology from Westmont College, Santa Barbara, California; an M.Div. degree from Denver Seminary, Denver, Colorado; and a D.Min. degree from Western Seminary, Portland, Oregon.  He has served as a pastor in two churches, associate pastoral staff in three churches, as a denominational district executive minister, and as a church consultant. Together with his wife, Leona, Richard served from 2003-2014 as co-director of 2nd ½ Ministries of Converge. He is co-author of the books, My Life After Work (2019), Third Calling: What are you doing the rest of your life? (2016), and accompanying Study Guide (released January 2017),  Amazing Grays: Unleashing the Power of Age in Your Congregation, and Mastering Church Finances (Multnomah Press). He and his wife, Leona, along with their son, Jonathan Bergstrom (of BergstromCreative.com) produced “Musical Chairs,” a thought-provoking 10-minute film about finding purpose in the second half of life.

Leona Bergstrom is Director of Re-Ignite, a ministry division of ChurchHealth. Leona has a B.A. degree in Sociology from Westmont College, Santa Barbara, California.  She is a Certified Aging Service Professional having completed certificate programs in Retirement Housing Administration, Human Service Management and Project Management.  She has worked in the field of gerontology for 35 years, planning, implementing and managing a variety of social and health care programs for older adults and their families. Along with Richard, Leona  co-directed  2nd ½ Ministries of Converge from 2003-2014.  She has served as a ministry leader and member of the Board of Directors for CASA Network. Her professional roles include: Director of Programs for CRISTA Senior Community in Seattle, WA,  Director of Senior Health for St. Joseph Hospital in Bellingham, Washington, Community outreach educator for the Area Agency on Aging and  Chair of the gerontology certificate program at Western Washington University. She is co-author of the books, My Life After Work, Third Calling: What are you doing the rest of your life? (released August 2016), accompanying Study Guide (released January 2017) and Amazing Grays: Unleashing the Power of Age in Your Congregation; and co-producer of the film Musical Chairs. She has published articles in several Christian magazines and blogs. She is a respected speaker on the issues of midlife, aging and caregiving.

Richard and Leona recently launched Re-Ignite U, a platform for offering inspirational and educational courses for Boomers.

The Bergstroms live near Seattle, Washington.