There. I said it.

As a nation, we are increasingly aware of our shared intolerance for discrimination based on race, sexual orientation, and religious preference. Nonetheless, we can’t quite seem to grasp how bias and prejudice based on a person’s age harm our lives. And these negative preconceptions thrive—in the media, corporations, healthcare, churches, and, yes, sports.

During the Seattle Seahawks game against the Indianapolis Colts on Sunday, September 12, 2021, commentators Kenny Albert and Jonathan Vilma were out of bounds with their banter about Head Coach Pete Carroll’s age. Does it really matter that he is older than most NFL coaches or that he “looks like he’s 45?” To consistently and repeatedly call out one’s age is AGEISM. And, sadly, this last of the great discriminations to be defeated is barely recognized, much less amended.

The pre-occupation with Pete’s age came to a tipping point for me when they mocked his shoes. “Geriatric shoes,” they called 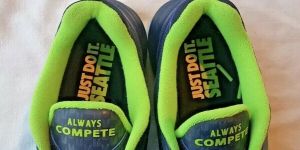 them. And yet, his Nike Monarch custom shoes are esteemed in Seattle, expensive on e-Bay, and expected in the Seahawk locker room. And, why make such a note of them? Ageism.

In her book, This Chair Rocks*, Ashton Applewhite establishes a “manifesto against ageism.” She says it is the only “ism” that is a prejudice against our own future selves. “It takes root in denial of the fact that we’re going to get old…and we go to great lengths to distance ourselves from that future self.” In other words, scorning another because of age disregards the value of our own long life.

Pete is arguably a notable coach because of his skill, positivity, enthusiasm, and commitment to running up and down the field with his team. He’s had decades of experience—and he wears no-nonsense, functional shoes. And, I’ll bet the snarky commentators can’t keep up with him.

Of course, maybe I’m a bit sensitive to the chiding since Pete and I both turn 70 in the next few weeks. Not that the number matters.