Home/News, Re-Ignite Your Life/Lessons from Grandma Orcas
Previous Next

We in the Pacific Northwest treasure our Orcas. If you are fortunate enough to spot one or a pod of these beautiful black and white “killer” whales in the Puget Sound, you understand the meaning of “electrifying.” They are majestic, graceful, purposeful, and magnificent. To Native Americans, they symbolize family bonds, the strength of community, love, and protection. Legends and multiple forms of artwork attempt to illustrate the Orcas’ magical significance.

While these beautiful marine mammals teach us much about nature, they also demonstrate the power found in maturity. A few 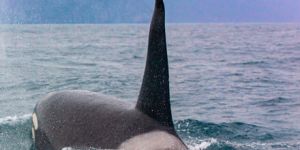 years ago, the Smithsonian Magazine*reported a study** showing after menopause, Orcas “go on to become group leaders with valuable survival skills.” Female Orcas continue living as much as 40 years past the end of their reproductive capability. Studying photographs of whales on the move revealed a pattern: “Post-menopausal females, the oldest in the group, typically swam at the front and directed their pods’ movements in a variety of scenarios.”  They showed the others how to survive even when salmon and other prey were in short supply. The article states:

Only killer whales with years of hunting experience know how to find them. During these rough times, the researchers saw that post-reproductive females would swim at the heads of hunting groups with young male whales in close pursuit. They were almost always the matriarch’s sons.

I have a son and four grandsons, so this observation captivated me. While the next generations are notably more energetic, ambitious, and ready for the “hunt,” there are times when the wisdom and knowledge gained over a lifetime are valuable and useful. The challenge for human mothers and grandmothers is to learn how to invest in our offspring’s welfare with grace, purpose, love—and sensitivity. May God allow us to become sage “group leaders with valuable survival skills.”

She speaks with wisdom, and faithful instruction is on her tongue.
–Proverbs 31:26 NIV

*“After Menopause, Killer Whale Moms Become Pod Leaders” by Ben Mirin, Smithsonianmag.com, March 5, 2015.
**The original study based on 43 years of research, “Reproductive Conflict and the Evolution of Menopause in Killer Whales” by Darren P. Croft, Rufus A. Johnstone et al was published for open access in Current Biology in January 2017