A Tale of Two Spires

A Tale of Two Spires 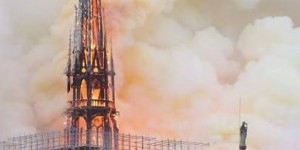 engulfed the historic building. Thousands of onlookers gathered along the banks of the Seine River, gasping and crying in horror when the upper part of the 300-foot spire of this cultural and religious icon swayed and then collapsed. It was if the heart of Paris was being ripped out.

My first thought was the attack on the World Trade Center on September 11, 2001–and the fall of its twin towers. Like 911, the fire at Notre Dame was catastrophic to the citizens of Paris and the world. My deeper gut reaction, however–this was more like my own experience of losing a church to fire over 30 years ago in Steamboat Springs, Colorado. 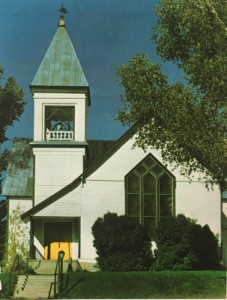 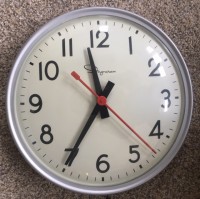 behind Euzoa Bible Church and sent a surge of electricity through the fuse box outside the church and through the knob and tube wiring directly into the second-floor youth pastor’s office. It ignited an inferno that threatened to consume the entire building.

My family and I were not sleeping in our parsonage next door to the church that night, but rather in a condo at the base of the ski village. We were in the midst of moving– leaving the church–and the pastorate–in just seven days. It had been a tumultuous and painful two years of ministry in the community. In the morning as we were driving toward the church’s new property for a week of outdoor Vacation Bible School, a friend pulled up beside us and asked: “Have you been to the church?” “No,” we responded. “Why?” “Just go!” she replied, offering no explanation. 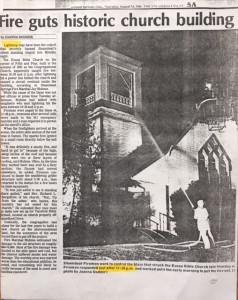 As we pulled up to the church, firefighters were spraying the final doses of water onto the smoldering building. The rancid smell of smoke and wet ash permeated the air. Fortunately, because of our plans to move back to Seattle in a week, I had removed most of my library from my church office—my books were safe.

Before the building was to be condemned, my wife and I 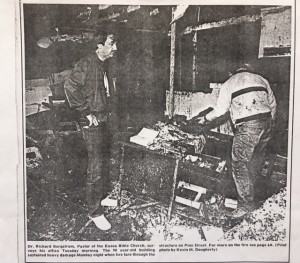 were allowed to enter the church building to see the damage and collect a few personal items. We were overcome with emotion. Much like those watching Notre Dame, we were stunned, dismayed and could not fully comprehend the destruction.

We randomly opened a soggy pew Bible to Isaiah 61:1-4 KJV, and read the following words,

“1The Spirit of the Lord God is upon me; because the Lord hath anointed me to preach good tidings unto the meek; he hath sent me to bind up the brokenhearted, to proclaim liberty to the captives, and the opening of the prison to them that are bound;

2To proclaim the acceptable year of the Lord, and the day of vengeance of our God; to comfort all that mourn;

3To appoint unto them that mourn in Zion, to give unto them beauty for ashes, the oil of joy for mourning, the garment of praise for the spirit of heaviness; that they might be called trees of righteousness, the planting of the Lord, that he might be glorified. 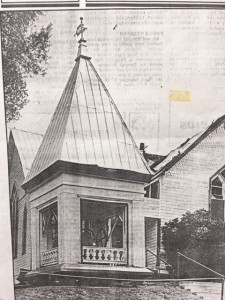 Although our steeple did not collapse during the fire like the Notre Dame spire, it did have to be removed shortly thereafter due to the danger it posed. Long-time members of the church gathered on the lawn outside and watched their historic steeple with its bell tower being lowered to the ground. The stress on one of the ladies was so severe she died of a heart attack–or perhaps a broken heart–a few days later.

In the days that followed, the elders and we discerned that God was not done with us there yet. We reversed our decision to leave. Although the years that followed were not easy, God used that fire to place a new call upon our lives to serve Him. It has been a call that has taken many different paths in the thirty-three years since, only reminding us that in the midst of our tragedy, there is new hope springing from the ashes of defeat. In the aftermath of that event, I began to write about my experiences in the pastorate. It opened up a whole new ministry for me beyond the walls of my church.

Notre Dame Cathedral may yet rise from the ashes. We chose not to rebuild the 100-year-old 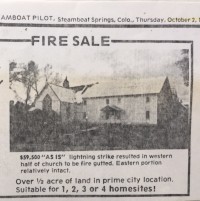 structure that was taken out by a lightning-induced fire. Instead, putting the past behind us we put the building up for sale “as is,” and moved on.

I cannot pretend to know what the Parisian’s should do with their Cathedral. One thing I do know–the church is NOT the building, but rather the people who call themselves followers of Jesus. It is about them that Jesus said, “On this rock I will build my church, and the gates of hell will not prevail against it.” (Matthew 16:18) 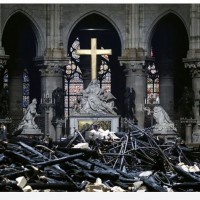 Shining forth amidst the rubble inside the Notre Dame Cathedral stands this cross. It is a symbol of the hope to be found in Christ–even when one’s world has collapsed and all that is left is ash and a fallen spire.

About the Author: richard

Richard Bergstrom, D.Min., is a church consultant, pastor, and author. He is President of ChurchHealth and co-directs Re-Ignite with his wife, Leona. He is passionate about helping others find purpose and passion in life and ministry. He and Leona live in Seattle, Washington.